In terms of cinematography, I’ve been very intrigued and beguiled of the work of the Polish DoP, Slawomir Idziak.

Best known for his work with director Krzysztof Kieślowski, Idziak has the incredible ability to bring out the beauty in the ordinary life. His choice in movement, framing and lighting displays a certain vibrant, yet intimate quality in the stories being told.

The following is an excerpt from Kieślowski’s beautiful The Double Life of Véronique (1991):

In the clip, we see the titular character Véronique leaving a cafe, to escape the person she’s fallen for. Up until this point, she’s been confused and struggling to understand herself: this scene is the tipping point for her anxiety, and as a result, she flees. The camera stays with Veronique, almost from the point-of-view of a bystander or a close friend, keeping an eye on her. The movement remains hand-held, maintaining a documentary type of feel. We then see her enter an apartment building, and go into her own POV.

It’s hard to put my finger on exactly, but somehow Idziak manages to perfectly capture the emotions of the protagonist at all moments. His use of close-ups seem to carry the weight of the world in their simplicity: 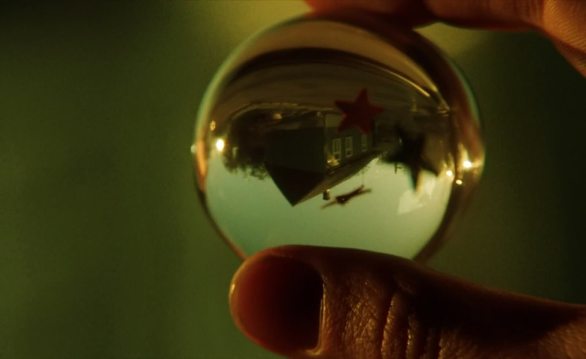 …or shooting through glass objects…

…giving an ethereal sense of transparency.

“Being a cinematographer is not simply to have a lot of ideas, but being conscious of how a certain style is going to be accepted by the audience. The way you are going to photograph a film affects the story; changing the style of the film changes the story as well so it’s something from the very beginning – from the script – trying to see which way to photograph it to support, to underline the story.” – Slawomir Idziak

To achieve the warm, fantasy-like look of Véronique, Idziak shot on 35mm film, and applied yellow filters on the lens, as well as ND grads. He also often used red and green lights to further add to the tone and texture of the film.

On using handheld as opposed to Steadicam:

“It’s something to do with a certain sense of rhythm, you adapt easily to the actors’ rhythm. The Steadicam dampens the rhythm between the actor walking and the cinematographer walking. So I am trying a different technique, I am trying to adapt my way of working to the actors. I am breathing with them, I am walking the same steps and in my opinion you are getting the identical effect, and much faster because you don’t need all the preparation, or a special operator.”

He mentions in an interview that “if the visual side of a film is not conceived before shooting, then it will never come into being.” I admire his philosophy of seeing cinematography not just as being technically astute, but seeing visuals as a form of storytelling language. I hope to follow in his footsteps.

Here’s a great interview with Izdiak himself, talking about his experiences: http://moviexpress.tripod.com/id10.htm

“The magic of cinema consists in the fact that we bid our life farewell for a moment, and a new life emerges for us.”